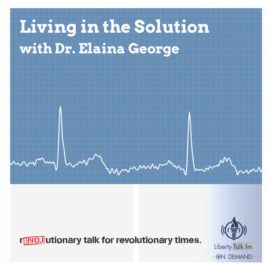 Dr. Marilyn Singleton, M.D., joins Dr. George for a frank discussion about the state of our healthcare system.… Read More

Conservative activist Jeff Lukens joins Dr. George to discuss the Christian church & how the foundation of liberty connects us to God.… Read More

ccess the LibertyTalk FM streaming broadcast server to listen to the best voices in talk radio promoting liberty any time day or night. In addition, the streaming server offers live original programming around the clock Monday through Friday, affording you the listener the opportunity to join the conversation. Nevertheless, as media consumption continues to evolve,  LibertyTalk.fm offers podcasts on demand of both individual hosts as well as a consolidated playlist of shows from the streaming server optimized to a podcast format. Further, we simply Love that through the beauty of technology and many sleepless nights coding, LibertyTalk.fm is able to offer listeners access to a live talk-radio streaming server to counter old-media talking heads who through the protected market provided by the FCC, six corporations now control over 95% of what we read, see and hear. So let’s be honest, if you are dependent upon a government license to broadcast, the content you provide just might-maybe (abso-f–ing-lutely) be slanted to promote the endless fear which elevates the STATE’s calls for evermore power, authority, and taxes.

Yes ladies and gentlemen, it seems quite clear indeed, that over the last 100+ years since the U.S. Government forced its way into media under the guise of “protecting the airwaves”, i.e. Net-Neutrality 1.0. Whereby the large media conglomerates via lobbyists and direct appointments to the Federal Communications Commission have managed to create for themselves an oligopoly wholly insulated from actual competition or upstarts, until now.

As in the end, the call for STATE licensing is merely a form of restricting those “not in the big club” from entering the market. The STATE’s allergy to Liberty abounds via attempts to shut down Uber and Lyft as each annihilate long-established taxi cartels, the Supreme Court destroying Aereo who offered “public airwaves” broadcast of television to mobile devices, or post DMCA copyright, turning artists into sharecroppers as corporatists craft yet another royalty scheme granting more for them and less for the actual talent.

Because let us be honest, news, conversation, discussion, and dissent all are forms of Free Speech & the Press. Thus the foray into regulating talk radio via the Radio Act of 1912 and later the Federal Communications Commission was simply how the U.S. Government side-stepped the First Amendment to the U.S. Constitution, so it could “protect the public from too much radio interference.” [Read: competition]

Thus, how exciting is it to be alive to witness the crumbling STATE losing its grip over the freedom of humanity? So tune in and access the streaming server via our on site or your favorite player like VLC, Windows, etc. If you enjoy LibertyTalk.fm, we will totally appreciate you sharing the stream with a friend or two, because hey, Liberty, the ability to pursue dreams unencumbered by clipboard bureaucrats is downright groovy.