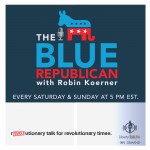 Tisha Casida, Chair of Blue Republican Colorado talks about her upcoming event, “Rebellion”, to empower and train young people who want to get into electoral politics on their own terms and Robin muses on the progress of the rebellious United Kingdom Independence Party (UKIP) in England, who, by the time of airing caused a major “earthquake in British politics”, as Nigel Farage likes to say.