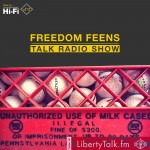 The Freedom Feens Talk Radio Show is an upbeat, clean, great-sounding talkfest heard weekdays during those early morning hours favored by night owls, insomniacs, and college students. It offers a unique mix of general-interest coupled along with smart political commentary, witty-banter, and a healthy dose of laughter. One thing is for sure, Freedom Feens is always high-energy entertaining broadcast> However this is not a traditional “morning zoo crew” type of show; It is accessible and light-hearted, but remains an absolutely thought-provoking listen.

A rotating cast of fascinating co-hosts joins Michael W. Dean for each show. The show covers a wide variety of topics, but remains philosophically consistent, i.e. small ‘l” libertarianism. The Feens find that this has and continues to appeal to the widest array of today’s more sophisticated talk radio audience.

Michael and his co-hosts dissect the events of the day and then tie them together with timeless universal truths about life, liberty and the pursuit of happiness. As for the word “Feen,” it is street jargon for “fiend.” Thus, the Freedom Feens are true fiends for real freedom, not the government-regulated “freedoms” to wit passes for liberty these days.

Feen behind the scene

Michael W. Dean was a rebellious handful from a very young age. While testing extremely high on various aptitude tests, his rambunctious demeanor coupled with a natural dislike of bureaucratic authority figures resulted in said administration asking him to leave the local government public school. He was later also kicked out of the private all-boys Church Farm School for unleashing a furious litany of barbed ad hominems towards the head master. Needless to say, the dislike for regimented-standardized conveyor-belt “education” followed Michael to his secondary schooling, thus resulting in him flunking out of Jamestown Community College as a result of a penchant for playing hookey, which in his own words “so I could go to the library and actually learn something.”

Despite his refusal to follow the STATE-approved “Master Life Plan,” Michael went on to direct several successful documentary films including D.I.Y. Or Die: How To Survive as an Independent Artist and Hubert Selby Jr: It’ll Be Better Tomorrow (Narrated by Robert Downey, Jr.), and Gun Training With The Non-aggression Principle, Vol 1: Basic Handgun and Rifle with Jared Waltz. In addition to his time spent in front of a microphone broadcasting, he has also authored several books including, $30 Film School, $30 Music School, $30 Writing School, Starving in the Company of Beautiful Women, The Simple Pleasures of a Complex Girl, and DIY NOW! Digital Audio. During the early 80s hardcore punk era, Michael played in the band “The Beef People.” He has also lent his vocals and bass playing abilities in Baby Opaque and Bomb (Warner Brothers). He continues to make music now singing in the hardcore punk band, Right Arm of Wyoming.

Michael Dean has been interviewed by many mainstream media outlets including, NPR, BBC radio, and featured on NBC, VH1. His prolific personality has also landed him in print via Variety Magazine. Michael contributed to O’Reilly Media’s Digital Video Hacks book, edited O’Reilly’s DV Filmmaking: From Start to Finish by Ian Aronson, and wrote “MAKE a Mailbox Movie” in MAKE Magazine Volume 3. He co-authored (with Alan Lastufka) a book for O’Reilly called YouTube: An Insider’s Guide to Climbing the Charts. Thus in conclusion, Michael Dean stays up late, sleeps in late, and works at home as a writer and filmmaker. He is married to his beautiful wife and in 2009, they along with the cats moved from sunny yet congested Los Angeles, California to the wide open picturesque state of Wyoming in order “to get away from it all.”

Derrick J Freeman is an activist for peace, broadcaster, video producer who also calls Keene, New Hampshire home. Derrick J regularly hosts Freedom Feens and Free Talk Live on terrestrial radio. He also produces and appears  on the live internet radio video podcasts Peace News, Bitcoin Talk Show, Sick Sad World, and The Bitcoin Group. In 2012, his dedication to activism and exposing the sheer lunacy of the STATE’s prosecution of victimless crimes,  he committed a litany of victimless crimes so as to provide material for a documentary he produced aptly titled, “Derrick J’s Victimless Crime Spree” which chronicles his journey as he attempts to break free of from his government chains and to wit ultimately led to his arrest and spending 60 days incarcerated in a STATE cage.

Derrick also volunteered for five years on a crisis helpline and worked as a fundraiser for both Greenpeace and the ACLU. However Derrick J left his “Gayborhood” in Philadelphia for the Liberty-fueled, tree-lined streets of Keene, New Hampshire in 2011 after the trifecta of Stefan Molyneaux, Rand, and Ludwig von Mises flipped on his “Liberty light-switch.”