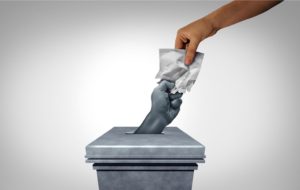 This year’s presidential election is the fourth since 2000 to be marred by either widespread allegations of voter fraud or of foreign interference. Politicians and pundits have long counted on elections to wave a magic wand of legitimacy over the reign of whoever is designated the winner. But Americans are increasingly wondering if the endlessly-trumped “consent of the governed” has become simply another sham to keep them paying and obeying.

Twenty years ago, America was in the throes of a fiercely disputed recount battle in Florida. Democratic presidential nominee Vice President Al Gore won the national popular vote but the Electoral College verdict was unclear. Florida’s 25 electoral votes would give either Gore or Republican candidate George W. Bush the 270 votes needed to win the presidency. Six million votes were cast in Florida, and Bush initially had a winning margin of 537 votes. But the count was a complete mess.

Some Florida counties had antiquated voting equipment while others had harebrained ballot designs that confounded voters, resulting in “dangling chads,” “butterfly” ballots, and other unclear preferences. After the Florida Supreme Court ordered a manual recount of disputed votes in all counties, the Bush campaign legal team quickly filed briefs with the Supreme Court seeking to stop the process.

In a controversial decision, the Supreme Court, in a 5-to-4 ruling, stopped the recount because it could result in “a cloud upon what [George W. Bush] claims to be the legitimacy of his election,” Justice Antonin Scalia wrote. Justice John Paul Stevens dissented: “The Florida court’s ruling reflects the basic principle, inherent in our Constitution and our democracy, that every legal vote should be counted.” No such luck. Two days later, the same Supreme Court majority blocked any subsequent recounting because it was “not well calculated to sustain the confidence that all citizens must have in the outcome of elections.” Sustaining confidence” was more important than counting votes. Justice Stevens again dissented: “We have never before called into question the substantive standard by which a State determines that a vote has been legally cast.”

The 2000 election results seemed almost as shaky as the story of the Lady of the Lake giving the Excalibur sword to Arthur, thereby signifying his right to rule England. At a minimum, the outcome of the 2000 presidential election was decided by lawyers and political appointees (justices), not by voters. Former President Jimmy Carter observed in 2001, “As we have seen in Florida and some other states… the expected error rate in some jurisdictions is as high as 3 percent of the [vote] total.”

Four years later, George W. Bush narrowly won reelection after a campaign that was boosted by numerous false terror attack warnings that helped frighten voters into giving him another four years. Ohio was the key state determining the outcome that time, and its results appeared tainted by numerous decisions by Republican election officials who favored Bush. Democrats also charged that the electronic voting machines used in much of Ohio had been manipulated to produce misleading vote totals.

In January 2005, Democratic members of the House of Representatives launched a brief challenge to the legitimacy of the 2004 presidential election. Rep. Maxine Waters (D-Cal.) complained that many states used more sophisticated technology for lottery tickets than for elections: “Incredibly even in those few jurisdictions that have moved to electronic voting… we do not require a verifiable paper trail to protect against vote tampering.”

Republican Congressmen went ballistic. Rep. Rob Portman (R-Ohio) accused the Democrats of seeking to “obstruct the will of the American people.” Rep. J.D. Hayworth (R-Ariz.) bewailed that the protest “serves to plant the insidious seeds of doubt in the electoral process.” Rep. Roy Blunt (R-Mo.), the House Majority Whip, sought to put the entire government above questioning: “It is the greatest democracy in the history of the world and it is run by people who step forward and make a system work in ways that nobody would believe until they see it produce the result of what people want to have happen on Election Day.” Blunt’s “nobody would believe” phrase was more prescient than he intended.

For tens of millions of Americans and for convention halls full of editorial writers, the 2016 presidential election results were forever tainted by allegations that the Trump campaign colluded with the Russians to score an upset victory. Those allegations spurred a Special Counsel investigation that haunted most of Trump’s presidency and helped Democrats capture control of the House of Representatives in 2018. In 2019, Special Counsel Robert Mueller finally admitted that no case of collusion existed. But we have since learned that there was pervasive collusion between Obama administration officials and federal agencies to target Trump’s 2016 campaign. And, as George Washington University professor Jonathan Turley observed, the media ignored “one of the biggest stories in decades. The Obama administration targeted the campaign of the opposing party based on false evidence.”

Instead, the media cheered secretive federal agencies that had interfered in American politics. Washington Post columnist Eugene Robinson captured the Beltway’s verdict: “God bless the Deep State!” The media’s veneration will make it easier for the FBI, CIA, and National Security Agency to meddle with if not fix future elections.

This year’s presidential election may be the most fraud-ridden event since 1876, when four states had disputed results and Congress gave the presidency to Republican Rutherford Hayes despite ample evidence of conniving. Earlier this year, some states mailed ballots to all the names on the voting lists, providing thousands of dead people the chance to vote from the grave. More than 92 million people voted by mail.

President Trump warned that the shift to mail-in voting could result in “the most corrupt vote in our nation’s history.” A 2012 New York Times analysis concluded that “fraud in voting by mail is… vastly more prevalent than the in-person voting fraud that has attracted far more attention.” But that blunt admission vanished into the Memory Hole as the media endlessly derided any apprehension of electoral foul play.

Shortly before Election Day, Democratic candidate Joe Biden boasted, “We have put together I think the most extensive and inclusive voter fraud organization in the history of American politics.” A Reuters “Fact Check” analysis revealed that Biden’s comment was a “slip of the tongue” and that he likely meant “voter protection.” Since Election Day, the same media outlets that insisted that there was no corruption in the Biden family now assure Americans there was no significant voter fraud.

The 2020 election controversies are being fought out by lawyers and judges. The media is hoping that hailing Joe Biden as the rightful ruler will speedily restore legitimacy to the political system. But 70 million Trump voters are unlikely to be swayed by the same media that endlessly belittled both the president and his supporters.

Perhaps the real problem with the current American political system is that elections are practically the last remaining source of apparent legitimacy. Presidents take an oath to “preserve, protect and defend the Constitution of the United States.” But this has long been a nonbinding throwaway gesture – if not a laugh line for Washington insiders. Elections failed to prevent every recent American commander-in-chief from expanding and exploiting the dictatorial potential of the presidency.

Should we expect anything different from Biden? When he was chairman of the Senate Judiciary Committee, he co-authored numerous oppressive drug laws and forfeiture laws that helped obliterate much of the Bill of Rights. His political philosophy never went beyond his famous utterance: “Lock the S.O.B.s up!” He supported expanding federal power whenever there were votes or campaign contributions to be pocketed.

Biden has said he would dictate a national mask mandate and could impose a national lockdown if Covid infection rates rise. The same media outlets that served as Biden’s Basement Barricade during the campaign – helping him avoid challenges that might have raised questions about his positions and mental capacity – will cheer any restrictive Covid policy Biden imposes. In lieu of constitutionality, we’ll hear that it is the “will of the people” or some such pablum.

Nor will there likely be any way to constrain Biden if he follows the advice of his bellicose foreign policy advisors. Counterpunch editor Jeffrey St. Clair asked: “Which country will Biden bomb first in order to ‘restore America’s place in the world?’” The Biden campaign promised to “increase pressure” on Syrian president Bashar Assad – presumably by providing more arms and money to the terrorist groups that Obama began aiding almost a decade ago. Biden will sanctify his foreign bombing campaigns with the same lame legal tautology that the Obama administration used to justify killing Libyans in 2011. The Justice Department announced that Obama “had the constitutional authority” to attack Libya “because he could reasonably determine that such use of force was in the national interest.”

The more power presidents capture, the more facts they can suppress. The federal government is creating trillions of pages of new secrets every year, effectively making it impossible for average citizens to learn the truth about foreign policy until long after U.S. bombs have dropped. Biden is unlikely to end the pervasive secrecy that makes a mockery of self-government.

In his victory speech last Saturday, Biden pledged to “restore the soul of America.” But Americans were not voting for a faith healer; they were selecting a chief executive for a federal government. Only 20 percent of Americans nowadays trust the government to “do the right thing” most of the time, according to a Pew Research Center survey. The election results will likely further erode federal legitimacy at a time when Uncle Sam has no trust to spare. How many more election debacles and brazen abuses of power does Washington believe the American people will tolerate?

James Bovard is the author of ten books, including Public Policy Hooligan, Attention Deficit Democracy, The Bush Betrayal, and Lost Rights: The Destruction of American Liberty. He has written for the New York Times, Wall Street Journal, Playboy, Washington Post, New Republic, Reader’s Digest, and many other publications. He is a member of the USA Today Board of Contributors, a frequent contributor to The Hill, and a contributing editor for American Conservative