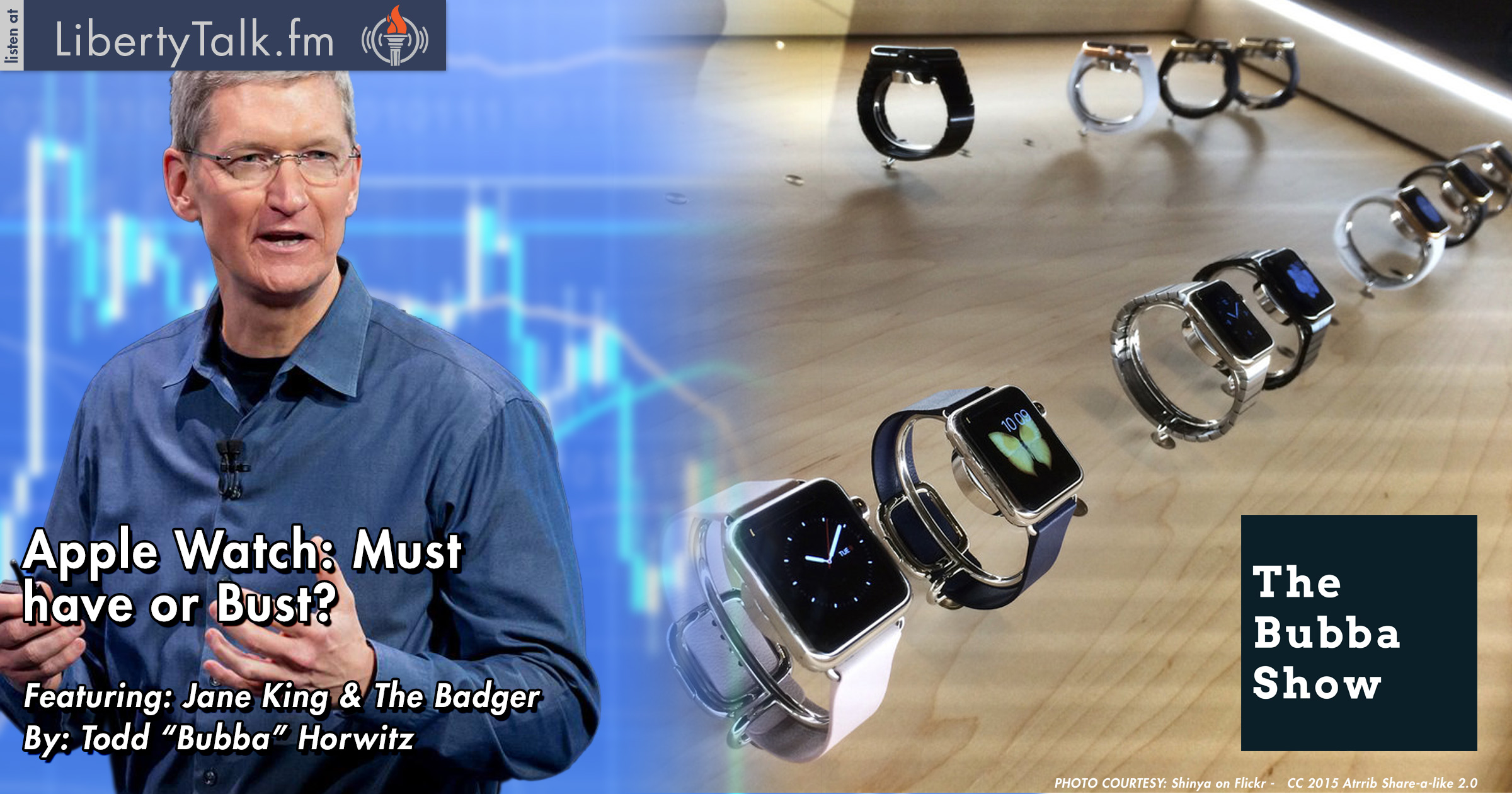 Bubba comments that the markets continue to remain in a congested pattern, and reiterates investors must wait for opportunities in the market to appear. Todd remarks as to the relationship between risk and reward and points to the Martha Stewart case as an example of the consequence when that ratio tilts into the realm of excess. While Bubba believes that the current  pattern of market congestion will end eventually, but warns that no one has a crystal ball as to the precise time when the markets will untangle themselves from the current state of  gridlock.

Apple Watch: Will Consumers Bite at Opportunity for Increased Functionality from a Watch?

Jane King joins the show  to offer her comments regarding Apple’s look to enter into the wearable tech sector via: the Apple watch. While Jane admits she herself is most certainly a gadget gal, the Apple Watch might just be a bit too much for her own taste. Thereto, Jane and Bubba agree that the primary use of a watch is to tell time, and it remains uncertain if there really is a demand for such a device to offer increased functionality.

The conversation turns  to Bubba asking Jane to comment on the recent news in the Chinese stock market, whereby she compares China’s recent economic surge to the U.S. during the turn of the last century. Bubba states he believes that the current bull market in China has reached a top.

Thereafter, the Badger relays to Bubba that the central banks have indeed accomplished their goal of shifting paper assets into equities and away from products in the market to wit bear interest. The Badger offers his solution to the Federal Reserve’s Quantitative Easing, however he cautions that should the economy encounter a serious downtown, all bets are off. Bubba adds that he feels the FED has done an absolutely horrible job and there is little reason to doubt that QE will end in any other manner than a total unmitigated disaster current QE will end in a disaster.

In the final segment of the show, Kim Parlee, Vice-President at TD Wealth Management and host of Business News Network’s MoneyTalk asks Bubba about the merger between Shell and British multinational oil and gas company BG Group. Bubba indicates the merger appears to be a good fit for both companies and he adds that the cheap dollars make the nearly $70 billion dollar deal possible. The conversation the turns its focus back to the FED whereby Bubba reiterates his criticism for  the way in which the FED both under Bernanke and Yellen have handled QE and feels that that the only real solution is derived from the need to raise rates and finally take the punishment as a consequence of FED policies which led to both the tech and housing bubbles this century. Bubba remarks a black swan-like catalyst will trigger the next sell off in the market, but again there is no way of knowing the timing thereof.