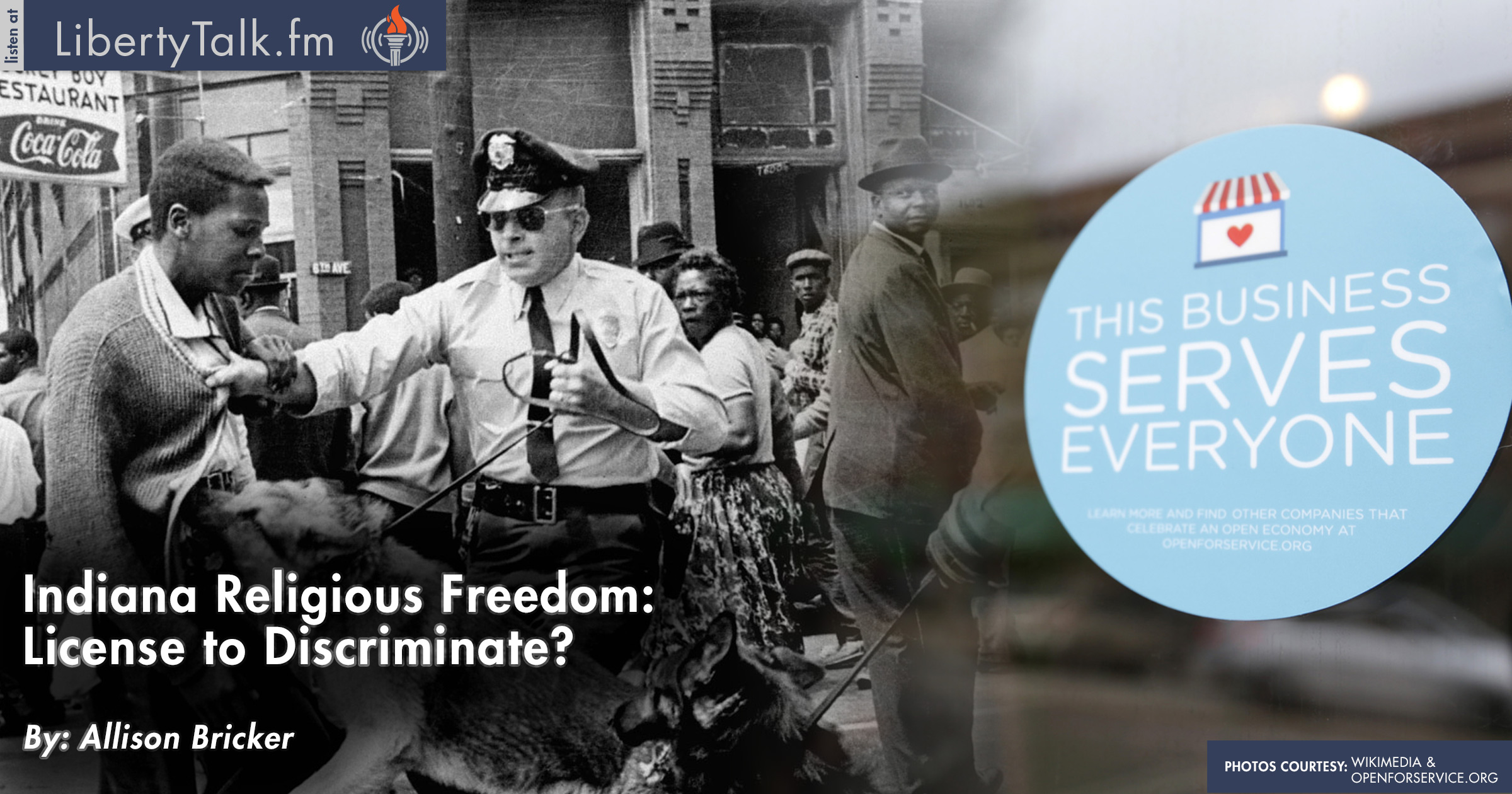 INDIANAPOLIS, Ind. – The outrage over Indiana’s Religious Freedom Restoration act signed last week by republican Governor Mike Pence has now spun virally from social media into traditional STATE licensed old media outlets. However, I am remiss to see validity in the opposition’s primary talking point whereby the law effectively drags Indiana back to Antebellum America. In fact, as I have watched the STATE’s intrusion into marriage erode, I hoped for just such a clarification.

It remains my belief that the only abomination unto same-sex marriage is the STATE’s claim that it and it alone holds authority to sanctify a voluntary partnership, however never would my support extend to giving said couple a legal mechanism to demand an official ceremony be performed on their behalf by a priest, rabbi, etcetera opposed to such a union.

No one has a right to demand a service from another against their will, most especially when said demand relies upon the violence of government to punish a dissenting opinion. Free Association, ergo the ability to choose whom you solicit, patronize, and become friends with is a Natural Inalienable Right wholly outside the jurisdiction of any STATE. If Christians demanded using the force of LAW that every resident attend only the Christian church in their locale, despite one’s private faith or lack thereof, this would be such an obvious violation of Free Association as to warrant rebellion; thus how is compelling through LAW a baker, florist, or priest to provide a service any different? Who owns the individual the STATE, the People, or does the individual dictate their own conscious?

Personally, I prefer Candid Bigotry to the covert prejudices engendered via Politically Correct, STATE crafted “equality” enforced through the STATE’s violent goons with guns and financial penalties. I am unsure how it is a negative development to know whether a business owner places their bigotry above the pursuit of profit, as it makes it far easier to know where to spend my monies.

Therefore yes, in my opinion businesses that choose to discriminate or provide a lesser service to any customer based on race, religion, sexuality, gender identity, economic strata should absolutely be punished financially via the pocketbooks of their existing and potential future patrons. Such financial protest is peaceful, voluntary, and vastly superior to the STATE’s universal application of thug-like violence.

Further, should I be compelled to provide technical services, web development, or coding to a White Supremacist? Should LibertyTalk.fm be forced under threat of STATE fine to air a commercial promoting the removal of Muslims from America?

Perhaps if I work studiously, provide excellent customer service to my clients, and should fortune smile upon me, I still hold on to my dream of one day opening a quaint little coffee shop that serves the absolute best hot cup of Joe and good old fashioned Midwestern sides dishes. Anywho should this actually come to pass, I plan to hang the following sign in several places, and I will be damned before I let a STATE goon with a gun tell me otherwise: 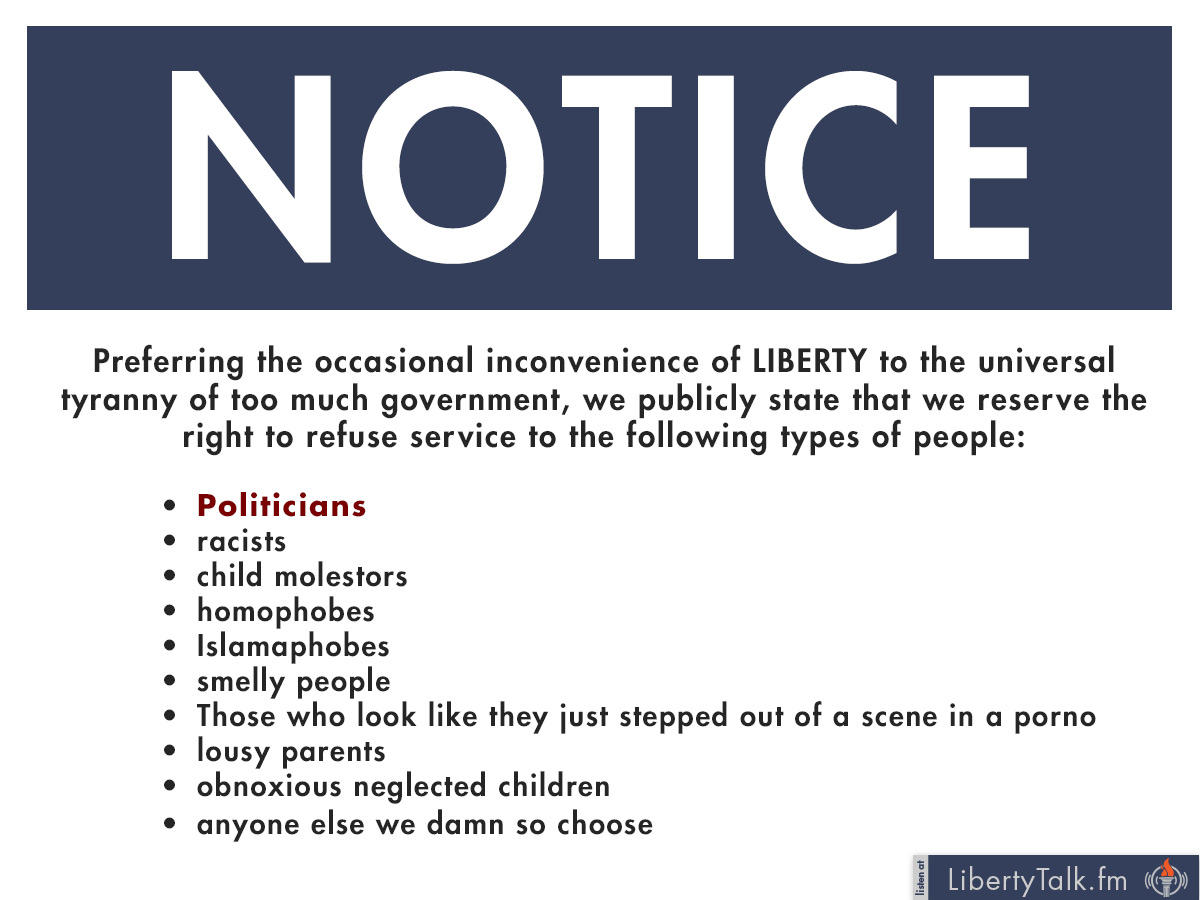 Reading the myriad of old media hackery regarding the Indiana Religious Freedom Restoration Act, there seems to be an utter void of intellectual sophistication surrounding the absolute difference between STATE enforced institutional racism, i.e. Jim Crow, segregated public schools, public transportation, and city/state service as opposed to the occasional private sector bigot. The former was enforced, the same as Slavery, the Fugitive Slave Law that made it a crime to give aid and comfort to a runaway slave, by government, not businesses, churches, or individuals.

The worst discrimination whether slavery… all the way to the wanton murder of minorities, stemmed from action enforced by the state, not private business.

Such backwards unsophisticated comingling of the two perhaps as a means to whitewash the STATE’s primary role in the evil of slavery and racial segregation, is definitively demonstrated by the self-appointed Political Correctness Police who are determined to muddy the waters so as to rationalize using the STATE to force a private business owner into providing a service. Collectivists who dismiss individuals as irrelevant cows and who routinely vomit forth “The Greater Good” mantra as a means to destroy individual Liberty love to confuse public with private. It is perhaps their favored non sequitur.

Please note Exhibit A: one Jennifer C. Pizer of Lambda Legal who states:

“Essentially, they are saying that if same-sex couples can come into the public arena, we want the right to selectively build a moat around ourselves.”

Whether purposefully or due to her ignorance of being raised in a STATE run factory school, Ms. Pizer unblinkingly conflates a bakery with the voting booth; Newsflash: Yep your STATE has a duty to offer Equality under the law and treat all residents equally whether voting, on trial, obtaining a driver’s license, etc. However, a private baker or florist who operates a business does so in the PRIVATE sector, you know where people actually make profit as opposed to STATE entities that rely on stolen wages, fees, and taxes to operate.

One does wonder if Ms. Pizer encountered a PRIVATE business who hung a sign stating “No Shoes, No Shirt, No service” if she would whine they too were building a moat of untenable discrimination. Clearly, if you are dealing with a bureaucrat, elected official, or any other office of STATE supported through plunder, it qualifies as PUBLIC; otherwise you are dealing with a private business owner and no matter how much you stomp your feet, wet the bed, or cry foul, you do not have the right to demand they serve your whim. The solution is simple: take your money elsewhere and make them famous as one who places their bigotry above profit.