INDIANAPOLIS – We here at LibertyTalk FM have happily been peacefully nullifying Governor Eric Holcomb’s unconstitutional stay home orders since his initial decree back in March. At last count, my own interaction with fellow Hoosiers & liberty lovers now tops 300, with the last gathering being now in excess of three-weeks, and here I am typing away, still feeling fit as a fiddle and having no plans to comply with the “New Normal” or their Chinese-Style “Contact Tracing” surveillance.

However, more inspiring is to discover that despite King Holcomb’s endless propaganda tropes during his circus-like Coronavirus press briefings, whereby he insists 99.9% of Hoosiers are complying, data provided by wannabe Social-Credit cellphone GPS tracking company Unacast, precisely illustrates the opposite and wraps up the total dishonesty of the governor in a neat little visual bow. 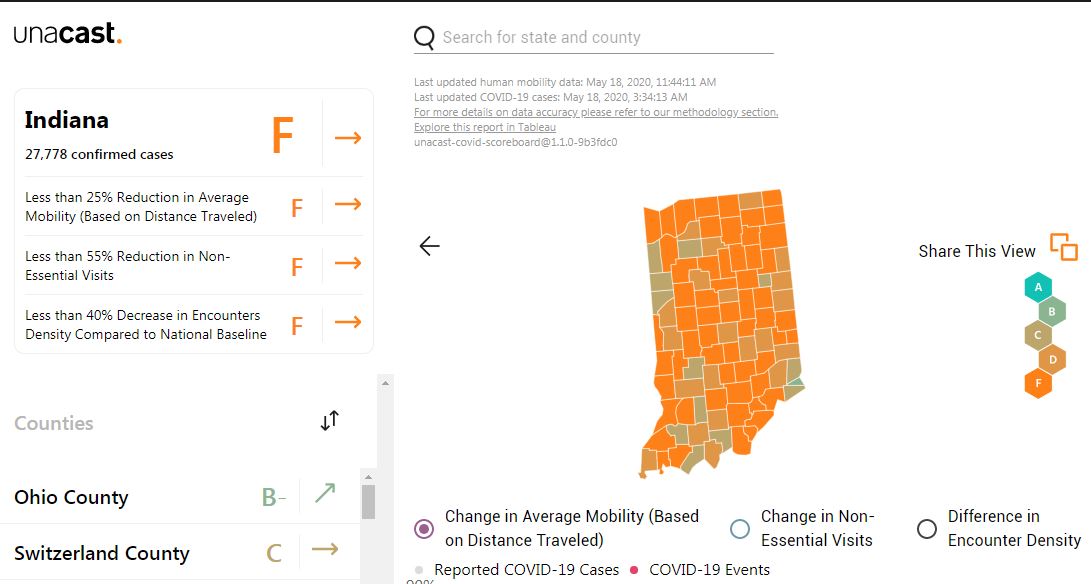 In fact, the entire state of Indiana receives an ‘F’ for reducing travel & reducing non-essential visits. Gee who knew people like to visit family & friends… why it is almost as if humans need contact with others for emotional well being.

So three cheers to my fellow Hoosiers for not falling for the FEAR propaganda & inflated COVID-19 deaths as reported by un-elected ISDH Commissar Kristine “um um lemme check…not sure, um” Box and from a governor who was after all, put on notice by Secretary of State Mike Pompeo back in February that he is aware Holcomb and 16 other treacherous governors are listed by name as being “friendly” to Chinese Communist Party goals. Thus, as lying and inversion of facts are cornerstones of Marxist philosophy, the governor is merely executing the standard playbook of authoritarians who ascribe to the “we rule you” philosophy in hopes that if he repeats the lie often enough, it will magically become true.

But the News Gets Even Better

While FCC licensed Fake News continues to shill the FEAR narrative relying on now wholly debunked modeling proffered by disgraced Imperial College London researcher Neil Ferguson, who initially predicted 1 to 2 million deaths in the USA, was then forced to revise his murder-fantasy population-culling numbers down to 500,000 after being called out by Oxford, then still tried to save face claiming social distancing for a whole one-day at the time was the primary cause of revision downward… the entire country is ignoring the “New Normal” which is absolutely essential for anyone who plans on ever standing in honor of the National Anthem and singing along in celebration unto “…the land of the free and the home of the brave.”

So here’s to you Mr. & Mrs/Miss/Mz… pull-yourself-up-by-your-bootstraps-rugged-individualist American-Patriot. Truth be told, the Global Communists have been incrementally tightening the screws at an ever-quickening pace for the past two-decades (even longer actually), slowly eroding this country’s understanding that Humanity’s Natural Rights are bestowed by the Creator and not merely a benevolent gift by and dependent upon the capricious whims of the STATE. Thus, in the words of famed philosopher Frédéric Bastiat, let us now try LIBERTY!

Therefore prudence indeed shall dictate the wisdom in keeping your powder dry & your terminal window hot. Whereby, now that the Coronavirus narrative continues to be shredded by an ever-growing body of evidence, if we learned anything over the last four-years from Russia-gate, to the smearing of Flynn, Stormy Daniels, Ukraine, Sham-peachment, and now the SCAM-demic, while abject bitter losers, these Post-Modern Marxists are out for blood, and are willing to burn down the totality of the globe’s economy, with America as the first target in futile attempt after futile attempt to usher in their “equally” poor, starving, disarmed, genderless” utopia of STATE Supremacy.