Editor’s Note: We reached out 48 hours prior to publication to Raz Simone to request comment and clarification so as to provide an opportunity for him to express in his own words as to the several issues raised both in the video and Facebook posts. Unfortunately he has thus far failed to respond. 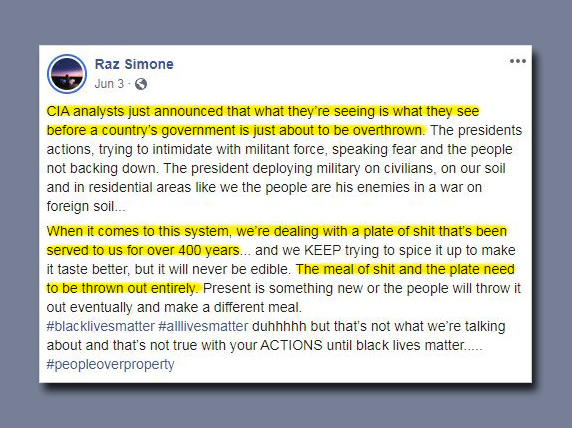 However contrary to the MSM persona, several alternative media journalists who have infiltrated the zone and captured video paint a picture altogether different that stands in stark contrast to his “prince of peace” curated archetype. Case in point, footage captured at night has emerged from CHOP of Raz Simone handing out AR-15 style long guns from the trunk of a white vehicle to obviously inexperienced activists who struggle to even remove the magazine. Moreover, based on the dress of some individuals seen in the video who don typical “Black Block” clothing, some activists appear to be affiliated with AntiFa, the far-left communist organization that seeks the total Marxist subversion of the United States.

Further despite his SoundCloud & AirBnB persona where evidence details he has achieved some success, writes on Facebook that he is but a victim of “400 years of oppression.” This talking-point trope now making the rounds stems from the roundly discredited New York Times “1619 Project” the seeks to marinate black Americans in a culture of paternal dependence upon government & continued victimhood.

However, despite any success Raz has achieved in his entrepreneurial life, he writes on Facebook on June 3, 2020 that the USA is a “plate of shit” and said plate “need to be thrown out entirely.” i.e. the wholesale overthrow of the United States Government.

A Historically Gay Seattle Neighborhood Being Controlled by Black Man Who Dislikes Gays,  Another Example of Left Cannibalism 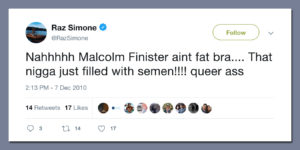 Radical leftists are shameless in their virtue-signaling for marginalized communities. However, each time the rubber meets the road, examples emerge of inconsistency within the “though leaders” who are the movement’s public face. Thereto, the same has been uncovered with Raz which portends an interesting juxtaposition. In a tweet from 2010 that he has since delete, Raz intimated fellow music artist Malcom Finister was “filled with semen” and a “queer ass.” Such seems especially problematic when viewed in context that the Capitol Hill neighborhood that presently constitutes CHOP is the historic home of Seattle’s LGBT community.

Thus, can be people grow, and not rely on pedantic dismissives to chide their competition and fellow humans or does one stay true to the left’s broad brush fallacy of “All Cops Bad” and thus initiate Cancel Culture and Trial by Twitter?

Further, if “all cops are bad” how would Raz Simone rationalize a similar statement of “all blacks are bad?” You cannot simply paint with a broad brush to collectivize one group while refusing to do the same for all others, and therein lies the fatal flaw in such one-size-fits-all thinking. How is this conducive to winning actual support for reform, (it’s not) lest such is not the actual desire outcome.

Thus, Raz Simone demonstrates candidly that he is a Communist Red Guard style agitator whose character is thus marked by every act which may define a Tyrant, and is unfit to lead anyone out of oppression, imagined or otherwise.