UPDATE 001 @ 5:34pm ET on 11/17/2016 – We have confirmed that New York Magazine is the developer of the Google Chrome Extension, Fake News Alert, which is based on Melissa Zimdars list.

However, failing to conduct her own research, she relied on a website updated 10 months prior to smear LibertyTalk.fm. The offending link being a show that has not aired on the network in over 18 months. Bravo, Melissa, bravo. [Insert sarcastic golf-clap here.] 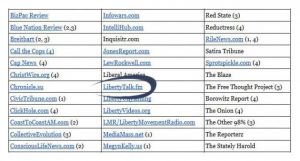 However, we are not alone, as Melissa’s love for her Daddy Government also led her to smear with her anti-free speech brush LewRockwell.com (the most popular Libertarian editorial website) and ZeroHedge, because hey reporting on the scandalous dealings of the likes of Goldman Sachs & Morgan Stanley is also apparently a no-no according to Melissa.

One does wonder if she will get a bonus Milk-Dud for being such an obedient state worshiping tax cow, as it is painfully obvious she does not appreciate the historical struggles & lessons of blacklists in regards to a free and open press. Nor does she seem intelligent enough to deliniate between news as opposed to editorial opinion. Further illustrated this past election cycle following the revelations laid bare by the heroic actions of Wikileaks, Mr. Edward Snowden, or Ms. Chelsea Manning.

Let us hope that those suffering from such a disgusting worship of the STATE, such as Ms. Zimdars may yet learn to appreciate the larger danger of blacklists unto historical context in eroding a free press.

Perhaps, Melissa would do well to reacquaint herself with the Trial Peter Zenger and the endgame for those who seek to squelch opinion & discussion under the guise of politically motivated media blacklists.

Requests for comment from Assistant Professor Zimdars have gone unanswered.