Inversion, whereby the desired outcome is the diametric opposite of the publicly stated goal or action is a favorite tactic of those who ascribe to the murderous philosophy of Marxism, itself now cloaked by a more palatable politically correct euphemism, Post-Modernism. Despite this rebranding of the Twentieth-Century’s most abstrusely blood-soaked doctrine, the motivation remains the same: the centralization and control over every aspect of human life from cradle to grave unto an “equally” poor, genderless, disarmed, and starving stable of obedient Tax Cows, ergo a Totalitarian Tolerance dictated and enforced by the STATE.

The seemingly coordinated effort last week by Apple, Facebook, Spotify, Google/YouTube, to ban Alex Jones from their platforms, after his having a presence for years, reeks of a real-time example of this most favored of Marxist maneuvers. As such, the Big Tech oligarchs are going all-in, raising the stakes hoping to capitalize on a two-pronged Hegelian strategy to victory.  Whereby not only does Silicon Valley’s deplatforming, at least in theory, check Alex Jones’ influence & ability to push-back against the progressive propagandists salivating to see a Blue Wave overtake Congress from Republicans in the mid-term elections; by sending InfoWars to the Digital Gulag, such has primed the outrage meter by appealing to an individual’s general sense of fairness and/or those holding perfunctory support of the First Amendment.

However, the cheap-shot censoring levied by social media technocrats is not the primary hazard, as the market is already responding: spiking the site’s organic traffic and pushing InfoWars mobile apps that remain accessible at the time of writing this editorial to new levels of popularity. No dear friends of Liberty, the true danger to Free Speech lies firmly in the authoritarian snake-oil salesman fomenting an inverse reaction that advances the true agenda to wholly undermine the principle of speech free from government oversight and thus institutionalize new-media communication under the direction of a petty bureaucratic politburo staffed by lobbyists & executives of legacy media, aka the FCC/FTC/FEC.

Most unfortunate, yet precisely as statists pine, many alternative media content producers and even Alex Jones himself are demanding the Trump Administration step in and force Big Tech to unban Infowars unto a so-called “Internet Bill of Rights.” Indeed, the cold cool shackles of censorship will be fastened whilst being couched in an innocuous sounding, but nonetheless direct imposition of placing a state decreed muzzle upon free & open dialog.

Inversion: The PATRIOT Act is to Patriotism as a backdoor STATE enforced Net Neutrality is to a Free & Open Internet.

We have seen & heard this ruse play out many times previous: 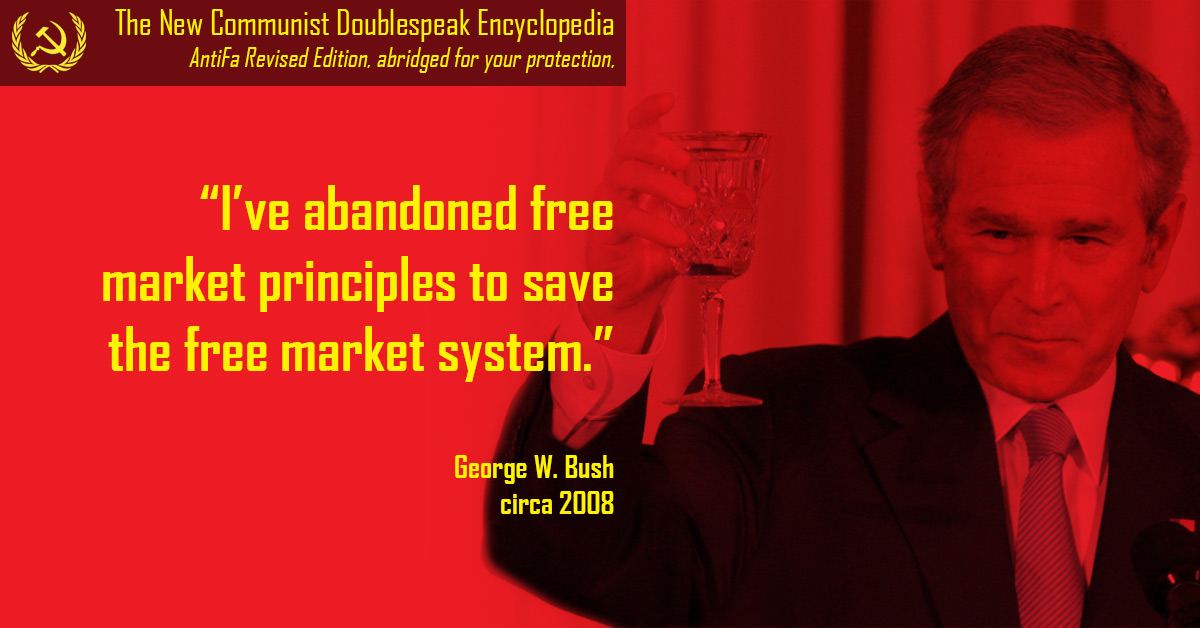 Moreover, the Marxist presupposition of “public airwaves” an utterly absurd notion that was used during the cancerous Progressive Era to usher in licensure of legacy broadcast media, resulted only in raising barriers to entry, restricting competition and wholly homogenizing a consolidated Pro-STATE message repetitiously drumming the public into many decades of lock-step obedience. It is no accident that five legacy corporations aided by regulatory roadblocks control nearly all of what is read, seen, and heard, as such was by design:

“Centralization of the means of communication and transportation in the hands of the state.”
Plank Six, Communist Manifesto 1848

Well-read students of history concentrating on the time following America’s successful secession from Great Britain, know that the intent behind the enumeration of a free press within the First Amendment to the Bill of Rights, was to prohibit the STATE from squelching the only form of mass communication available during the Founding Era. It is with minimal effort one would undertake by examining the events and writings of the day to conclude had radio, television, and even the internet been available, such would fall under the umbrella of being mass communication free from interference by sycophantic minions slithering the halls of Political Class institutions.

Nevertheless, the Marxists successfully implemented an end around the First Amendment and the principle of unbound discourse via the creation of broadcast licensure seizing upon the tragic sinking of the Titanic, claiming the crisis was caused by competition among too many broadcasters.

Now however, we are hearing calls that in order to “save free speech” such must encompass the wholesale destruction of the remaining vestiges of private property. Proponents of implementing an internet “Fairness Doctrine” rationalize the obvious oblivion of private property by pointing out that social media oligarchs receive corporate welfare from the STATE, and technically they are correct. Google, Facebook et al do receive monies stemming from lucrative government contracts. However, when was the last time more government solved a problem of prior state intervention? Did more debt via quantitative easing solve the toxic assets amassed throughout the creation of the housing bubble? The answer to the former as well as many more examples too numerous to list is no.

Assuming you will have lifetime unfettered access to a third-party’s private property is a bad business decision, not censorship.

Advocating for the government to step in and burn down private property rights to coerce free speech from obvious radical left technocrats is yet another example of the STATE executing a Hegelian Dialectic, i.e. create the problem, wait for the reaction, implement the state-centric solution.

Not surprising however is that the “solution” already waiting in the wings similar to the manner of how the PATRIOT Act or the Affordable Care Act were implemented, is seven levels of hell worse than the albeit arbitrary, politically-motivated stifling of Alex Jones on a handful of social media platforms.

Thus, whereas the radical-left have failed on several occasions to poison free speech unto claims of Hate Speech through the courts, another notion as farcical as “public airwaves,” now the authoritarians look to capitalize on the outrage in response to the capricious purge of InfoWars from Big Tech’s psychologically manipulative social media platforms.

On July 30, 2018, the website Axios published in full a leaked Senate Democratic memo, authored by former Big Tech investor & executive, turned pompous Democratic Senator Mark Warner of Virginia who sits as Vice-Chairman on the Senate Intelligence Committee, systematically outlining the implementation of a Chinese-style social-credit-score takeover of the internet by the United States Government. Among a bevy of authoritarian nocturnal emissions therein, is the requirement to “authenticate” user access via what is tantamount to requiring a driver’s license to access the information super-highway (sic). Another suggests that platforms confirm and capture a user’s physical location.

As such let us step-back and view the potentiality:

Such are the stakes at play, let us not fool ourselves otherwise. America is the only place on the globe with a deep ingrained historical tradition of two keystones standing in the way of a totalitarian seizure of the country. No other Western Nations, not the United Kingdom, not Australia or Canada, hold or elevate the concept of free speech and the private ownership of firearms.

The rest of the Western World long ago surrendered both their conscience and ability to self-defense unto the cancer known as Political Correctness, enacting Hate Speech laws and turning the totality of each nation into a “Gun Free Zone” save for the government goons armed with government guns.

Marxists must destroy free speech first in order to then gain monopoly on firearms so as to usher in their compassionate communist dystopia. Without the subversion of both in toto, their philosophy is as impotent as it is murderous.

If the result of this fracas over deplatforming is STATE intervention to “uphold” free speech, the follow-up will no doubt be the disarmament of Americans, and thus the death of the American experiment and heritage of self-government.

The Solution to this Crisis Resides Within Us, not the District of Criminals.

The pathway to solving this crisis unto free speech in the digital age is simple: use the available alternatives or buckle down and build a better-mousetrap. We as individuals have the power to vote with our mouse and make use of the several alternatives such as Gab.ai, Bitchute, DTube, MeWe. In addition, a mass exodus from leftist social media platforms will hit them in their bottom-line as advertisers lose eyeballs.

Further, the complaint that the alternative social media platforms do not have the reach as those well-established is not a justifiable rationale to dismantle the First Amendment. Simply contrast the reach of MySpace in 2008 as opposed to today.

The stakes are clear, begging the state to intervene will be the death knell in the subjugation of Individual Liberty for years to come and shall denote the rise of a technocratic dark ages.

Let us instead choose Liberty.*

If you like the talkies in lieu of words, check out these great related videos: