The New England Journal of Medicine has opted to further politicize the largest scam ever perpetrated upon humanity, i.e. COVID-19 and recommends in a new editorial President Donald Trump be voted out of office, although the traitorous editors lack the courage to directly name the president, because that is precisely the nature of their character, or lack thereof. Indeed mealy-mouthed spite is their preferred delivery:

“When it comes to the response to the largest public health crisis of our time, our current political leaders have demonstrated that they are dangerously incompetent. We should not abet them and enable the deaths of thousands more Americans by allowing them to keep their jobs.” 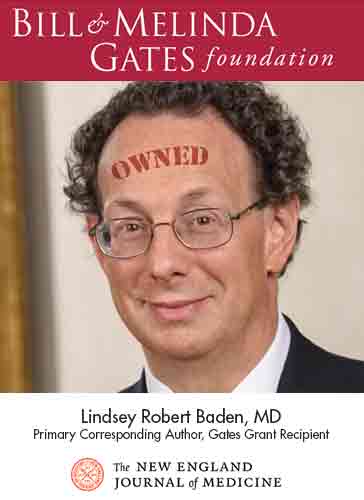 Should we then be surprised to learn that the primary corresponding author of the hit piece, Dr. Lindsey Baden, is a Gates Foundation toady sitting on vaccine grants therefrom? Interesting the piece was published following President Trump’s message on Wednesday evening about him being cured by an antibody cocktail sans vaccine.

Further, the New England Journal of Medicine editorial extols, surprise-surprise, the murderous lying Chinese Communists who harvest organs from their people unto a barbaric twist on medical tourism, use forced labor camps for ethnic minorities such as the Uighurs, and disappear political dissidents as having handled the SCAM-demic correctly via their use of extremely aggressive lock downs. Utterly draconian policies that saw people welded into their apartments, claims of sick people placed into body bags & incinerated, as well as propaganda of Chinese “citizens” a.k.a Communist Party members appearing to randomly fall down and die in several videos that mysteriously were able to leak past the CCP’s Great Firewall, yet a scene that was not repeated when COVID-1984 arrived in other countries around the globe.

Indeed these spineless medical fascists tow the WHO, Tedross, Fauci, Gates, Biden, Harris line of desiring Americans be perpetually masked, estranged from human connection via cyclical “social distancing” and forcibly locked down on house arrest for a second time seeing that the radical left has yet to fully destroy the Middle Class, economy, nor finished burning down our cities unto their color revolution. But don’t worry kids, all will be well once their mandatory DNA-altering, legally-indemnified Gates “vaccine” is forcibly injected into every man, woman and child from sea to shining sea.

All of this despite one of their own, perennial Deep State un-elected medical fascist bureaucrat, Anthony Fauci postulating back in March in the very same New England Journal of Medicine that COVID was likely to be no worse than the flu and NOT on the level of SARS or MERS.

“If one assumes that the number of asymptomatic or minimally symptomatic cases is several times as high as the number of reported cases, the case fatality rate may be considerably less than 1%. This suggests that the overall clinical consequences of Covid-19 may ultimately be more akin to those of a severe seasonal influenza (which has a case fatality rate of approximately 0.1%) or a pandemic influenza (similar to those in 1957 and 1968) rather than a disease similar to SARS or MERS, which have had case fatality rates of 9 to 10% and 36%, respectively.“

Odd then that he persists in hawking his flip-floppery Double-Speak on masks, wants a second lock-down, and despite the proven conflicts of interest, continues to hard sell the vaccine, which as new CDC data illustrates, he was correct, the Chinese Virus is indeed no worse than the seasonal flu:

We are indeed in the midst of a new cold war. A war that seeks the total destruction of everything the United States stands for, Liberty, upward economic mobility, the birth of the Middle Class, etcetera.  Make no mistake, authoritarians such as the heirs to King George the III, the Windsors in England have been attempting to bring America back into their control regime, since the original BREXIT, i.e. our secession away from their inbred pedophile monarchical cult in 1776.

Thus we as a people must do some serious soul searching, because we can’t be both: